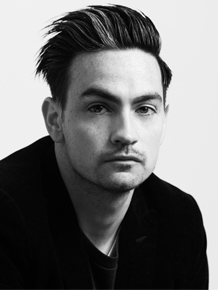 29-year-old Michael Francos joined the team in 2012 after being inspired by Darren’s work. He’s now a member of the prestigious Wella Generation Now team and finalist for the Men’s category in the British Hairdressing Awards with his work seen worldwide.

Michael has worked on London Fashion Week prepping male models and as D&J Ambrose’s Company Educator is in charge of all the team’s in house training. It’s a far cry from when he left school with no real idea of what to do career wise, but fate led him to take a Saturday job at his friend’s barbershop in Marble Arch before an apprenticeship at Toni & Guy where he stayed for 10 years, building a large male clientele particularly during his time in the Liverpool Street salon. Passionate about men’s hair, he undertook courses at Toni & Guy and Wahl and is much in demand with his clients, but watching Darren has awoken a feel for avant garde hair, with Michael saying “Just seeing his work makes me want to do my own work.”

Disheartened with working in chain salons, a move to Pinner spurred Michael to approach D&J Ambrose, and in doing so reinvigorated his passion for hairdressing. Says Michael, “Working with Darren has changed my perception, when you’re surrounded by enthusiastic creative people it’s inspiring and motivating. The salon really invests in training and photoshoots and Darren’s always keen to advise – when I started here I was messing around with hair up on blocks and he’d come and take time out to help me out. When you’re in a team that has success you feel it can happen to you if you follow their advice. Being a small team we get to work with him every day. And while he excels on the creative side, we’re a business and that needs to function: for Darren customer service is one of biggest things and he knows how to deal with clients as well, our mantra is to give clients our time.”

Michael had reached the Men’s image finals in the L’Oreal Colour Trophy but left Toni & Guy before the competition; however, he was soon back in the competitive arena with his finalist Men’s collection in BHA.

Of his aptitude for men’s hair, Michael says “I’ve always loved the whole image and style of men’s clothes, my dad used to drag me round shops looking at fabrics, we had Esquire on the coffee table, and my granddad came from Cyprus and was a barber. So for me, the image of clothes and style has always gone hand in hand. I hate when people say they love to do men’s hair because it’s quick and easy – it shouldn’t be!